Lineage is one of the more important factors in the martial arts. When an instructor passes his knowledge down from student to student he does so in the hopes that future generations will honor his efforts and sacrifices. They do so by respecting the rules, traditions and regulations he (or she) has put in place. Both lineage and certification are also important to document legitimacy and to prevent fraudulent or unqualified persons from claiming the honor that is not rightfully theirs and for diluting or diminishing the art. Imagine all the hard work and effort that goes into true martial art training and now imagine how a true practitioner would feel if his rank and honors were imitated by unskilled impostors. Rank is not just a technical achievement. It is also a position of leadership so there are a few different ways to achieve a “Rank” or title.

So one might ask, “Who is to judge legitimacy and who is to certify practitioners of a martial art?” In the orient the answer is much simpler due to the strict regulations regarding recognition of styles and rank. In the US the BAR association regulates lawyers and the AMA doctors and report to the government if there is any breach. Similarly in Korea the Government is tasked to regulate martial art activity since it is a professional field of study in the public schools and University system as it is in Japan as well. Here we have no such governing body to simplify questions of authenticity.

Here in the United States questions of martial arts legitimacy must ultimately trace back to the country of origin and then down to the head of style. If a rank or the legitimacy of a practitioner is to be questioned who better than the head of style to make such decisions. In the event of the untimely passing of the head of style the senior students usually band together to select a leader if the Founder had left no directions. When the founder of the art was unable to leave directors or when corrupt members of the school try to manipulate the decision then it is the responsibility of the peers of that founder to step in and make a decision. The corrupt individuals who tried to forcibly take charge will always shout their immoral demands but it is up to real leaders to follow the truth and do what’s right even if it is unpopular.

Just like in the military when a leader is killed in combat the next highest ranking soldier then moves up to that position even if it is someone five or six ranks below the original leader. That new person will hold the position until they can be trained up to qualify or until a more qualified person is available to fill the position. The same applies to traditional martial arts rankings. A Martial Arts school operates under the same rank structure as a military unit. That is why they are called “Martial” Arts.

About the author: R.W. Stone is currently a practicing veterinarian in Central Florida. He is an avid horseman, a master ranked martial artist, a best-selling western author, and a firearms enthusiast. After joining a martial arts school in 1970 Stone started studying Yudo with a Korean grandmaster. He eventually became a member of the Judo team of the University of Illinois. It was at the University that a Korean classmate and friend introduced him to Tae Kwon do. After graduating veterinary college, he found the martial arts becoming too sports oriented and eventually after moving from Miami to Central Florida he sought out a Hapkido grandmaster. Currently Stone is ranked 8th dan in Haemukwan Hapkido, a 4th dan in Daehan Yudo and a second dan in Kukki TaeKwondo. He is the Hapkido instructor at the American Dragon Martial Arts Academies. 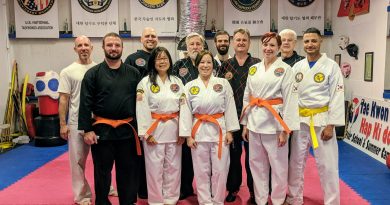 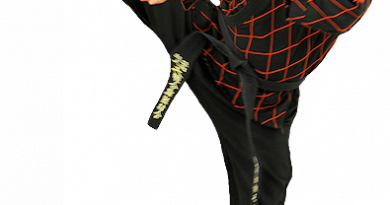 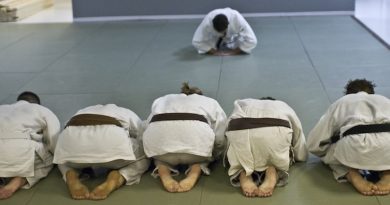 Kyung-Yea: The Bow of Acknowledgment